A reader recently asked me: Why no cat updates lately? I suppose the point is well-taken, given that the Internet’s chief virtue, limiting oneself to those that are purely benign, appears to pertain to cat photos and videos.

Having just gotten back from a few days away, our current three are letting us know they missed us.  They had food and regular visits in our absence, but I guess it just wasn’t the same.

Seymour, of course, is mellowest about it. He doesn’t stir much from this chair except to eat, but he’s purring more when petted. 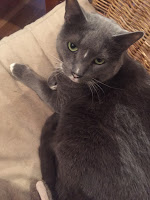 Then there are The Kittens, so to be known forever because we adopted them when they were 6-8 weeks old, at which time I could hold them both in one hand, although by now they are over 5-1/2 years old. (Similarly, my father had a set of female cousins, all born before 1920, who were known collectively as The Girls even when they were in their eighties.) They were pretty frantic on our return because, even though they are cats, we evidently loom large in their universe. 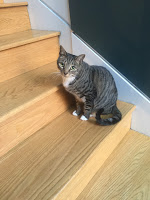 Gary has been meowing loudly and bringing us small mouse toys in his mouth. It was hard to sleep last night because he kept scratching at the covers so he’d have warm hands to sleep on. It was almost enough to make one doubt the common view that he’s perfect. A gently probing paw on the face at night is okay most of the time, but best if he’s calm enough to have retracted the claws fully.

Last but certainly not least – he wouldn’t like that – there is Sylvester, whose frantic mental world I’ve always wished I could imaginatively inhabit for just 5 seconds, so long as I could have a good long rest to recover right afterwards. (We like to say, it’s a shame his mom seems to have dropped him on his head early on.) 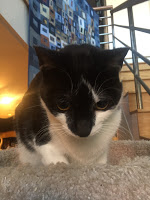 He has been meowing loudly for food, even when he isn’t hungry. When he lets me pick him up (an element of surprise helps), he gives a sudden screech, but then, so long as I begin petting his head very vigorously, the way he likes it, he just hangs there like a rag doll, all four paws extended outwards and down, for as long as I am willing to keep it up.

It’s nice to be back, fellas.