Sylvester, who nearly died this summer of a thymoma (along with a nearly disastrous general anesthesia episode that left him blind for 2 days) is now, many weeks post-surgery feeling well enough to meow plaintively, endlessly, and if I dare say so a tad annoyingly for food, to be followed by more food (perhaps more than his stomach will accept in so short a period).

He’s so expressive of his often churning inner states that I’m sure Descartes would have realized how wrong he was to think animals are unfeeling automata, if only he had met the little fellow. 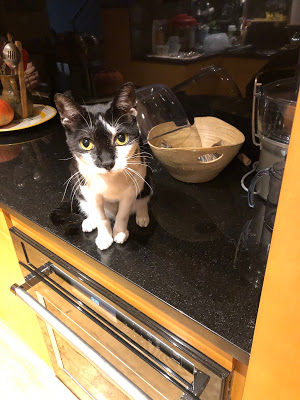