I have just completed reviewing the page proofs of my literature book, aka Literature and Inequality: Nine Perspectives from the Napoleonic Era Through the First Gilded Age. This is my last input in the process, which should now move smoothly (or even inexorably) towards fulfillment of the projected April 1 publication date.

The book is now also referenced here on the Anthem Press website, although the page hasn’t fully been fleshed out yet, pending further progress in the publication process.

The page proofs indicate that the book is 226 pages, including the bibliography and index (210 pages without them), so not at all a behemoth – rather, I am hoping, a smooth and enjoyable read that doesn’t require advance familiarity with all of the books that I discuss.

On April 13, we’ll be having a discussion of the book at an NYU Law School event. Branko Milanovic and Kenji Yoshino have graciously volunteered their services as commentators. Branko is a leading economic historian of inequality who also has written about the use of literature in developing sociological insights regarding the topic, and Kenji is a leading law and literature scholar (among other bows in his quiver). So I am very much looking forward to their comments.

This coming Friday (January 31), I will be appearing on a panel at the ABA Tax Section’s Annual Meeting, in Boca Raton, FL. The session will take place from 8:30 to 10 am, and its title is “How Should the US Tax System Respond to the Growing Wealth Gap: The Continuing Debate over Wealth Taxes and Other Tax Proposals to Narrow the Gap Between Rich and Poor.” My fellow panelists are Roger Royse, Linda Beale, and Richard Prisinzano.

Tax Jotwell has just, as of today, posted my annual short feature there. It’s entitled “Writing Books Versus Journal Articles,” but after brief ruminations on that general topic I turn to the real matter at hand, which is that of offering brief but extremely well-deserved praise to (1) Kimberly Clausing’s Open: The Progressive Case for Free Trade, Immigration, and Global Capital, and (2) William Gale’s Fiscal Therapy: Curing America’s Debt Addiction and Investing in the Future.

You can find the text of my brief Jotwell write-up here.

Earlier today, I returned to NYC from Asia, where I spent 3 days in Singapore, followed by 6 in Bali near Ubud.

While in Singapore, I gave the first (I believe to be annual, but by a rotating list of people) Sat Pal Khattar Visiting Professor of Tax Law Lecture. The slides for this talk are available here. You also can find the most recent draft of the paper here.

The side trip to Bali was purely for vacation and relaxation. Ubud is getting crazily over-built and over-grown (hence, risking some of the charm I remember from a trip there 30 years ago), but the resort that we stayed at, about a half hour’s drive outside of the town proper, was exceptionally delightful.

This being a sabbatical semester, I will soon be on the road again, albeit not traveling as far or for as long as I did most recently. On Friday next week (January 31), I’ll be speaking at the ABA Tax Section Annual Meeting in Boca Raton, FL. (You may notice a broader personal theme here – getting out of New York, in favor of warmer climes, during peak winter.)

More specifically, I’ll be among the members of a Tax Policy and Simplification Committee Panel at the ABA Tax Section meeting that has the current working title: “How Should the US Tax System Respond to the Growing Wealth Gap?: The Continuing Debate Over Wealth Taxes and Other Tax Proposals to Narrow the Gap Between Rich and Poor.”

Many thanks to Pamela Fuller for doing lots of hard work in getting this panel organized, although she won’t be appearing on it. My co-panelists will be Roger Royse, Linda Beale, and Richard Prisinzano.

We’re dividing up a set of related topics within the panel’s broader themes. For example, while others will take the lead in discussing such topics as recent empirical evidence regarding wealth inequality, Senator Warren’s wealth tax proposal, and Senator Wyden’s mark-to-market proposal for taxing capital gains upon accrual) I will do so with respect to (1) Edward Kleinbard’s dual BEIT proposal – an important income tax reform option that is often mysteriously under-appreciated, and (2) proposals to raise significantly the top rates in income and/or estate and gift taxes.

Tomorrow I head east – from New York City to Singapore, or 9,521 miles as the crow flies (if it was a unusually fit and vigorous crow). Also a time zone change of 13 hours. While there, I will be giving a talk on my digital services tax paper, as well as lingering for a few days (some of it in Bali near Ubud). I’ll post the slides, which are fuller than previously-posted versions, as I’ll be speaking for longer, on my return.

The event will be the first Sat Pal Khattar Professorial Lecture at the National University of Singapore (NUS) Law School. This is a venue that I know fairly well, as on three occasions I taught  mini-courses there (in connection with the now-defunct NYU@NUS program).

The lecture is named for a generous leading Singaporean with a tax background, whom I look forward to meeting while there. I believe that Sat Pal Khattar Professorial Lectures on tax issues are meant to become a regular, perhaps even annual, event at the NUS Law School.

A poster for the event can be found here.

Yay for the holiday season; it’s about time. This has been a tough last couple of months in some ways, for me as for our country.

In terms of my professional activities, my forthcoming book, LITERATURE AND INEQUALITY: Nine Perspectives from the Napoleonic Era Through the First Gilded Age, remains on-track for April 2020 publication by the Anthem Press. Copy-editing has begun.

In mid-January, I’ll be traveling to Singapore to give a lecture at the NUS Faculty of Law as Sat Pal Khattar Visiting Professor of Tax Law. It will concern my work in progress, Digital Services Taxes and the Broader Shift From Determining the Source of Income to Taxing Location-Specific Rents. A final version of the piece will then appear in the Singapore Journal of Legal Studies. The lecture time is long enough that I’m preparing, and will post here, significantly longer and fuller slides than I have posted upon giving briefer talks concerning the piece.

My new article in process is well underway, albeit perhaps ready for seasonal hiatus. Its current working title is What Are Minimum Taxes, and Why Might One Favor or Disfavor Them? It will discuss, inter alia, what one might call the “Mortimer Adler” problem with using minimum taxes, how minimum taxes might be defined (and why minimum tax-ness might matter), and it will discuss in this regard institutional manifestations that include at least the following:

(2) standalone versus minimum tax structure for taxing public companies’ reported financial statement income, with reference to the 1987-1989 AMT preference that was based on book income,

(4) GILTI (along with worldwide/foreign tax credit systems that are structurally similar, albeit typically not called minimum taxes if they tax foreign source income at the full domestic rate), and

(5) other global minimum taxes, such as the OECD’s Pillar Two proposal.

Vice President Biden has just proposed a 15% corporate minimum tax based on companies’ financial statement accounting income (aka, book income) above a large threshold. By contrast, Senator Warren is proposing a 7% add-on or additional tax on book income above the threshold. The difference is that the latter would be payable in all events, while the former would be payable only to the extent in excess of regular taxable income (albeit, with multi-year smoothing provisions).

Leaving aside perhaps the biggest issue here, which pertains to taxing book income or not, the contrast between them raises the classic old issue of minimum taxes versus separate add-on taxes. I have begin writing about this issue more generally (including in my analysis the US experience with the individual and corporate AMTS, as well as global minimum taxes such as GILTI and the OECD Pillar Two Globe proposal. But it also goes way back for me. The first article I published after entering academe in 1987 was entitled something like “Perception, Reality, and Strategy: The New Alternative Minimum Tax.” I published it in Taxes Magazine so I could get it out fast, although in style and substance it was more like a Tax Law Review article.

I am not, however, writing the new article within a time frame that’s aimed at participating in the current Democratic campaign debate. I’m more interested in getting a general analysis out there that I think is presently lacking, although lots of experts have a decent grasp on some of the main points. 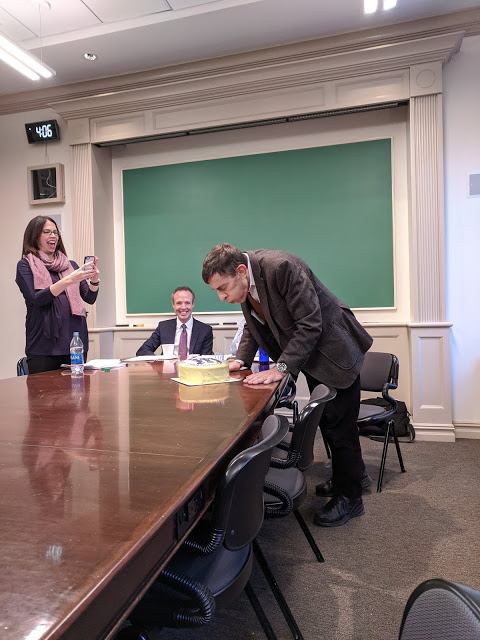